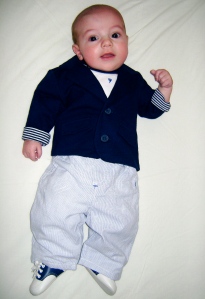 Henry usually “talks” to us when we are face to face with him.  Sometimes he like to “talk” to his toys.   Last night when we were driving home from church Stephen and I were talking to each other when Henry decided to join in the conversation.  He “chatted” with us for a full 15 minuets while we drove home!

We can only assume he was telling us about his time in the church nursery.  He told us all about how he didn’t want to go to sleep even though the nice lady rocked him for half of the service. Stephen asked him if it was because she had a funny old lady smell.  How rude!  I’m sure she smelled like candy and chocolate chip cookies and fun times at Grandma’s house :).  Henry said no, he didn’t want to sleep because there were so many great things to look at.  Then he told us all about the fun bouncy seats they have.  Oh, and they don’t just have one bouncy seat, they have several of them!  Henry is convinced that we need several too.  He likes to have variety in his life.  Then he told us about the super exciting toys they have for him to look at.  He thinks that we should buy him some more toys too.  You know how kids are….they are always asking you to spend your money on something…..  All in all, I enjoyed listening to my little chatterbox in the back seat.