At 2 years old Henry weighed in at 29 lbs 8 oz (82nd percentile) and measured 37″ (97th percentile).  He is wearing 2T clothes and sporting a size 7 shoe.  It looks like he is tanking up for a growth spurt so I wouldn’t be surprised if we have to get into 3T clothes and bigger shoes this summer.

Henry is learning more words each day and now when you ask him “can you say…..?” he will actually try to imitate you instead of give you a blank stare.  Quite often he will use the sound an animal or object makes to identify it before calling the object by it’s name. Henry will also identify objects with actions; like when he calls steps or a ladder an “up-n-down”.  It cracks me up when he spots a slide and excitedly shouts “Mama wook!  Up-n-down and weee!”.

Henry’s imaginative role play is getting more complex these days.  He pretends to cook, tries to sweep and runs around the house cleaning everything with an empty spray bottle and washcloth.  When he thinks something is broken he is quick to get out his tools and fix it.  Henry also likes to take care of his stuffed animals.  He feeds them, takes them for a “wok” by pushing them around in his cart and when it’s time for them to go to bed he says “ni-nite”, give them kisses and covering them up with a blanket.  I thought it was adorable when he was taking a bath and tried to sit his rubber duck on his lap so he read it a book.  The duck kept floating away or spinning around and each time Henry would pick it up and turn it’s head back towards the book and point to different things in the pictures. 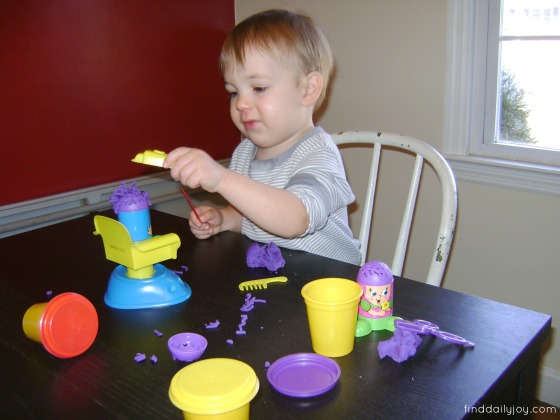 If Henry likes what he is eating you will hear his non-stop “mmmmmmm” while he chews.  If he doesn’t like something he will say “ewww yuck!” and try to put it on your plate.  I find it odd that he refuses to eat common meats like chicken, beef and pork but loves fish.  The only veggies he’ll touch at the moment are peas and pureed pumpkin even though he used to like a much wider variety.  If he had his was way he would eat nothing but crackers, cheese and fruit.  He is also partial to Italian food which is good because I love Italian food.

Before the baby came, we transitioned Henry to a toddler bed.  From day one he has been excited to sleep in his big boy bed!  I was hesitant to move him out of the crib because I had visions of him climbing out of bed and getting into all kinds of trouble.  But thankfully I can count on one hand the number of times he has gotten out of bed when he should be going to sleep and when he wakes up he waits for me to come get him. 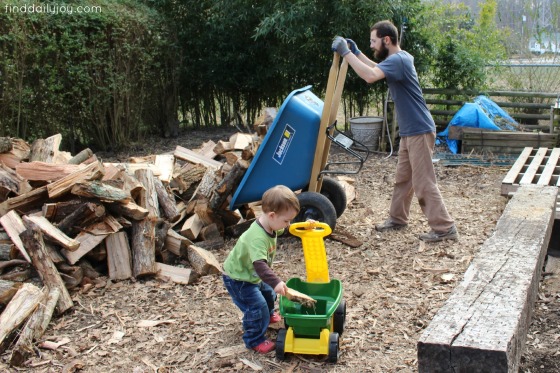 Henry may still have some cute baby pudge but he is no longer a baby.  He is officially a little boy who runs everywhere, roars loudly, crashes and smashes, collects sticks and rocks, and loves all vehicles (cars, trucks, trains, tractors, fire engines, construction equipment).  He has his stubborn and defiant moments but overall he is a happy-go-lucky kid who willing gives out kisses, hugs and cuddles.